There is a war raging in the liberal media regarding the appropriateness of The Thin Blue Line flag and its associative symbolism. Police detractors are unsupportive of our use of the flag and allege it represents repression and divisiveness, but I vehemently disagree.

The Thin Blue Line is the philosophical construct of a line representing the separation of the law-abiding citizenry from lawlessness and criminality. On one side of the blue line are the lawless, corrupt, and criminal elements bent on the destruction of society. On the other side of the line are the innocent and law-abiding community members continually preyed upon.

Standing on the blue line and protecting the fabric of society are our law enforcement officers. Historically, the term Thin Blue Line was derived from The Thin Red Line, a military engagement during the Crimean War in 1854 by the British Sutherland Highlanders 93rd Regiment at Balaklava. During the battle, the outnumbered men of the 93rd defeated a Russian cavalry charge. Typically firing from a four-man deep skirmish line on this day, they formed up two men deep, thus presenting a "thin red line" of riflemen. Firing three volleys, they caused the Russian retreat.

The thin, blue line that fights for right,
That never bends the knee to might,
Has ever since it knew God's light
Fought dar Oppression in his lair,
And routed Wrong from valleys fair,
Sweet Peace and Plenty leaving there.
N.D. Anderson (1911): Partial excerpt

New York Police Commissioner Richard Enright is mostly attributed to applying the term to law enforcement and used the phrase in several speeches in the 1920s.

The Thin Blue Line phrase was further popularized by LAPD Chief William H. Parker, who used it as the title for the LAPD-produced television program in 1952. He used it in numerous speeches referring to law enforcement as the "barrier between law and order and social and civil anarchy."

Only recently has the term come under attack by numerous groups as being divisive, oppressive, and racist. Not knowing the history of the phrase nor caring, these groups advocate disuse and removal of any referencing symbols. For several decades the representation of a black background separated by a blue line has symbolized The Thin Blue Line. My own agency's SWAT logo for over 40 years has been a black shield with a diagonal blue line. 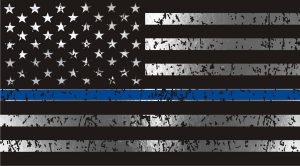 Popular today is The Thin Blue Line Flag, a black-and-white American flag with the eighth state stripe depicted in blue. It represents solidarity among all law enforcement personnel and all those supporting their efforts regardless of race or political affiliation. Furthermore, it symbolizes their oath of office and adherence to the Law Enforcement Code of Ethics.

Anti-police factions recently politicized the slogan and the flag by inferring they represent a "Code of Silence," an oppressive history of police racism and civil rights abuses, and point to use by white supremacist groups. Further complicating the controversy is a reference to the Blue Lives Matter movement. This movement, advocating enhancements for criminals targeting law enforcement officers, is an entirely different discussion and postdates use of the flag.

Law enforcement leaders who fail to educate themselves or their politicians and communities on the Thin Blue Line's honorable history are likely to buckle under pressure for its eradication. Unwittingly they are undoing a proud history, alienating their ranks, and apologizing when none is warranted.

Nonetheless, chiefs and sheriffs must balance their officer's morale with the desires of the politicians. Sheriffs are elected and typically have more incentive to resist political pressure. Chiefs are often contract employees or serve at the will of their municipality and can be easily terminated. The final analysis boils down to whether the public and political entity support their law enforcement agency.

The Thin Blue Line has become the Litmus Test for either the support or lack of support for the agency. As unpopular as the decision to remove the flags might be, it is not a "hill worth dying on." Frequently, officers may not fully understand the administration's decisions or appreciate their tenuous position.

We know our job is to enforce the law objectively, fairly, and professionally regardless of the public's sentiment. You will recall the first paragraph of the Law Enforcement Code of Ethics.

AS A LAW ENFORCEMENT OFFICER, my fundamental duty is to serve mankind; to safeguard lives and property; to protect the innocent against deception, the weak against oppression or intimidation, and the peaceful against violence or disorder; and to respect the Constitutional rights of all men to liberty, equality, and justice.

This duty is to be upheld regardless of our popularity with the public we serve. If we keep this concept at the forefront and stay true to our mission, we will still prevail with our without the symbolism of the Thin Blue Line flag.

As a police chief, I would rigorously educate the public and politicians and defend the flag's symbolism if confronted with this request. I would allow them to reevaluate their position, but if it did not sway their decision, I would address my employees and explain my decision to deauthorize the flag.

I will conclude with the words of the Athenian Demosthenes
from the Battle of Chaeronea in 338 BC and elaborated upon by Oliver Goldsmith, who said,  “He who fights and runs away may live to fight another day; but he who is battle slain can never rise to fight again.”

Here you will find all our Blog Posts. If you would like to suggest a blog topic, please send us an email.