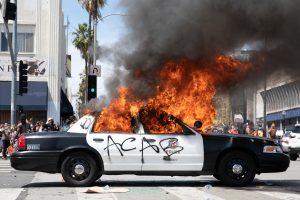 I am writing this blog post amid the COVID-19 crisis, George Floyd protests, and aftermath of the Rayshard Brooks shooting in Atlanta, Georgia. These incidents will undoubtedly change the law enforcement profession. I live in Southern California and the impact on cities and police departments in the area has dominated the news not only for these incidents but previous use-of-force incidents which have developed into a law enforcement reform movement.  I am sure your community has been similarly affected, but this is not the first nor the last incident garnering national attention we will weather.

Now more than ever, agencies need to recruit intelligent and mature individuals capable of independent thought. The George Floyd video may be shocking to some, but it has yet been determined what transpired before he was put on the ground. More facts will surface, but we should not rush to judgment. What few facts have surfaced indicate Floyd had several narcotics in his bloodstream and a heart condition.

During the mid-1990s there was a rash of deaths during physical restraint. The medical community recognized a correlation between narcotics usage, an individual’s compromised physical condition, physical exertion during resistance, and the position or amount of body weight placed on the arrestee’s upper body. When narcotics and sudden physical exertion were involved we suspected “Excited Delirium,” and when body weight or the position the arrestee was placed was an issue it was labeled “Positional Asphyxia.” In both situations, it was the cascading effect of the individual’s body organs shutting down which ultimately caused their death.

It is uncertain if Excited Delirium or Positional Asphyxia were a factor in Floyd’s death, but it highlights officers involved in physical alterations need to be mindful of the arrestee’s physical condition and provide appropriate medical attention if warranted. The pressure exerted to the trachea on the back or the side of the neck may restrict breathing or circulation through the carotid artery initiating the cascade of physiological effects leading to further trauma. Personally, from a review of the footage I can see the pressure was from only one knee, was confined to the upper back, and Floyd continued to talk. These lead me to the conclusion pressure was not a factor in constricting his trachea.

I have seen this scenario play out several times. While working the graveyard shift I saw a male round a corner from a street known for narcotics sales. As I pulled up behind and illuminated him with my spotlight he began to run. Requesting back up, I followed and he ran behind a closed business and ended up trapped in the fenced rear yard. I parked blocking his only avenue of escape. He turned to confront me, and I pointed my TASER at him. He was clearly high on something. His speech was slurred, eyes bloodshot, and was making bizarre martial arts movements. His shirt was open, and there was a visible surgical scar from his sternum to his belly button. I presumed he had open-heart surgery and was concerned with the potential effects of the TASER.

I tried to calm him and waited for back-up officers. When both arrived, we continued to order him to the ground but ignored me. I secured my TASER, and our plan was one officer would spray him with O.C. Spray, one would use a control hold to handcuff him, and I would use my baton if warranted. The O.C. spray had no effect other than to make all of us start coughing. He refused to get on the ground and I hit him on the upper leg with my baton driving him to the ground. We grabbed his arms and attempted arm joint controls. The net effect was everyone ended up on the ground with him hitting and resisting us, and we could not get his hands behind his back. One officer placed him in position for a Carotid Neck Restraint but did not apply pressure.

We managed to handcuff him and walked back to my patrol car. As I opened the back door, and with both officers holding his upper arms, he pushed his feet against the car and we all fell backward onto the ground. Even handcuffed he was able to get to his knees several times while he kicked and headbutted us. We eventually controlled his legs and upper body pinning his elbows to the ground. We were all trying to regain our breath and he calmed down and was still talking saying he wouldn’t resist any longer.  He then eventually stopped talking and I saw he was not breathing.

I immediately called paramedics and rolled him onto his back and started CPR. Medics defibrillated him and continued CPR while transporting him to the hospital, but he was dead upon arrival. In Custody Deaths are investigated similar to Officer-Involved Shootings. Our department’s investigative and Crime Scene Units responded along with the District Attorney’s (D.A.) Office. The three of us were ordered to the station and our Police Officer Association attorneys responded. Our attorneys advised to not give statements at this time.

During the interview we were given the standard admonishments, but refused to talk. The District Attorney Investigator I was being questioned by was outraged at my refusal and stated, “Then how do I know you didn’t shoot him?” I  told him that was a ridiculous presumption and he could just go over to the hospital and examine him if he wanted to. We were ordered to go to the locker room and relinquish all of our uniforms to the Crime Scene Investigations Unit for forensic examination.

In the end, the cause of death was systemic organ failure resulting in cardiac arrest exacerbated by narcotics overdose. The surgical scar was from an abdominal operation due to a gunshot wound, and he still had a projectile lodged near an organ the surgeons determined was too dangerous to remove. He wasn't a very nice guy and someone had shot him a year earlier. He was in overall poor health, and the combination of narcotics and intense exertion led to internal organ failure. All of us were cleared of any criminal culpability.

Many years later, I became the department’s Subject Matter Expert and taught our Excited Delirium and Positional Asphyxia Course. I incorporated this experience into the curriculum.  The course also taught ground control techniques during physical encounters and use of a Hobble Restraint. A hobble is a length of cord used to bind a subject’s ankles or knees which limits their mobility and every officer was required to carry it.

It will be your agency’s responsibility to ensure you are properly trained, but it is incumbent to use common sense. We will eventually know more about the Floyd incident, but Derek Chauvin had been an officer for 18 years and was J. Alexander Kueng’s Field Training Officer. Kueng had been released from training and was on only his third shift alone. Thomas Lane had been on the job for only four days, and Tou Thao had been an officer for eight years. There may be a component of hesitation by the officers present to take alternative actions and defer to Chauvin’s seniority. If that was the case, it should always be remembered to act appropriately in all situations and ensure you and others always do what is right based on the facts and circumstances. Should one of the officers taken over the arrest and attempted to change the outcome? We will not know until all the facts are in.

Given the volume of rioting in response to the incident we will have to be prepared for the verdicts after the trials. If the prosecution does not secure convictions we will likely see more riots.

I responded to the Rodney King rioting in 1992, which prompted procedural and training changes to the way we take a suspect into custody with minimal risk of injury to everyone. You should read up on the incident to get a better understanding, but ultimately officers applied an Electronic Control Device, the predecessor to today’s TASER which failed to work properly. Officers then struck King with PR-24 batons 33 times to obtain “pain compliance” and force him to put his hands behind his back. It was all captured on video and when a jury acquitted the officers on all charges it prompted the riots.

It is with this backdrop in mind you may be asking yourself if it is worth it to start a profession so many people are condemning? I say this was only one incident among millions of law enforcement yearly contacts that ended badly. Statistically, the law enforcement community interacts without incident far more often than not. The profession may be impacted somewhat, but without a doubt we will make reforms and regain the trust and confidence of our communities.

You will be asked your opinions regarding these incidents and the best advice is not to engage in lengthy conversations. Especially if you are talking with someone with a negative opinion of law enforcement. You are likely being set up and nothing you say will be satisfactory. I would diffuse discussion quickly by saying, “You want to make a difference and protect the community,” and leave it at that. I have not heard of any agencies adding questions to their in-person interviews about this incident, but would not be surprised if some agencies ask you about your opinion of the incident. Keep abreast of current news affecting the law enforcement community in order to best prepare, and I will have more to say about this in a future podcast episode.

For now, know you are entering law enforcement during a time when the community is distrustful of the police. Do not let this discourage you and divert you from your objectives, and do not be defensive or argumentative or it will just validate their opinion. Tell people you are entering law enforcement to serve the community and make it a better place for all people regardless of their age, race, religion or sexual orientation.

Join the LE Guru Private Facebook Page to ask questions and get answers.

Here you will find all our Blog Posts. If you would like to suggest a blog topic, please send us an email.